Well, the concrete world anyway! After my luxurious Spa day, Poss literally topped off the evening by taking me to the highest restaurant in the world – At.mosphere @ Burj Khalifa. Located on the 122nd floor, you almost feel like you’re dining in the stars.

Getting to the 122nd floor however is a bit like entering Fort Knox! We entered through the Armani Hotel and were taken to Level B1 where the restaurant’s reception is at the front of the Burj. After confirming that we did indeed have a reservation, we were escorted up an escalator to another reception desk that led to the lift that was about to catapult us up 123 floors. There are only 2 floor buttons on the lift panel and they need to use a touch-key card to press the restaurant floor. I’m not afraid of heights per se but an enclosed lift that’s about to shoot me up to the sky does give me the heebie-jeebies somewhat.

Having said that, the process to get you into the lift is very friendly and smooth and before you know it, you’re in, the lift doors have closed and you then realise there’s no turning back! So you do the only thing you can do, fix your eyes on the digital display. At first, it’s a little slow and you’re willing it to speed up but then your ears start popping and you’re trying to keep up with the numbers and a mere 45 secs later, you’re at your destination. Phew!

The restaurant is actually located one floor beneath the lift drop off so you have to make your way down a staircase first. And lo and behold, another reception. To your right is the restaurant and to your left is the lounge. We got there early enough to check out the lounge first and were escorted to a table by the window. There is no denying that the view is spectacular. The lounge is pretty big with a proper smoking and non-smoking section and for a Monday night, there seemed to be enough people in both. It’s pretty dark whichever side you’re on and while I get it’s mood lighting and all, I have a theory that all these places in Dubai do this so you can’t see the prices of anything properly. After having a scan through the drinks menu, I’m believing in my theory a little more – a vodka is about AED75, wine starts around AED80 a glass and a cocktail AED95. Yeah, it ain’t cheap! 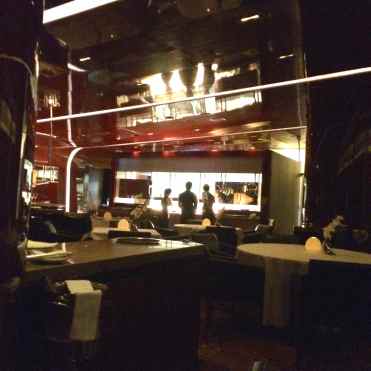 It then came time for dinner. Because Poss wanted to spoil me with a window seat for my birthday, he could only get a dinner reservation for 9:30. To be fair, he did only book 1 week in advance, so if you want to have a window table for the sunset, I suggest you book WAY earlier. From what I understand, At.mosphere has a minimum spend per person. I’m not sure if it’s more expensive by the window but all I can tell you is that we had a minimum spend of AED650 per person?? I wondered if i could even eat that much because I hardly eat! Well it turns out, it isn’t that difficult to hit the quota. As you can imagine, the prices are as high as the restaurant. I had the Hand Dived Scallops for a starter (albeit the best cooked scallops I’ve ever tasted) for AED240 and followed that up with a lobster tail for AED380. 2 courses in and I had pretty much hit my target. We also had the Burrata which, to be honest, does not hold a candle to La Petite Maison and while all the food was very nice, it wasn’t OMG, so you really are paying a premium for the At.mosphere (Get it?) 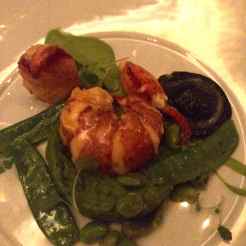 What I can’t fault them on is their service which was truly exceptional. As I said, even from the lift, we felt at ease and it only got better as the evening went on. Poss had told them it was my birthday, so I got a slice of very yummy cake with a candle (thank god no singing) plus a polaroid photo to boot. They also pay attention to details – I was getting a little cold and started hugging myself a bit when the Sommelier suddenly appeared out of nowhere with a Pashmina. That earned him lots of brownie points.

At the end of it all, was I glad Poss took me there? Hell, yeah. It’s a must do if you can. Is it a repeat do? Maybe, if we were entertaining the Queen!